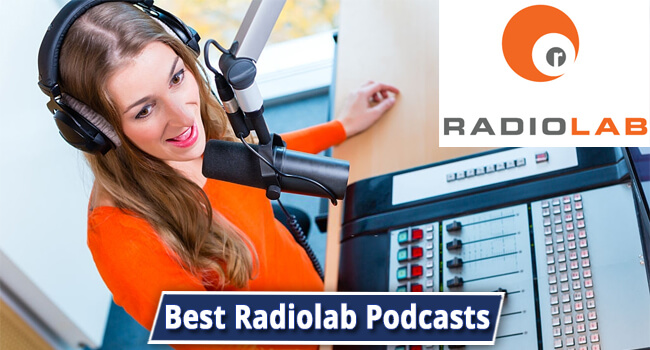 Radiolab’s presenters Jad Abumrad, and Robert Kurlwich took the world by storm with their science-oriented podcast Radiolab. The show has been running since 2002 and has had 15 series of five to 10 episodes, each between 30 minutes and an hour. So that’s a whole lot of listening.

The show features a lot of heavy topics, and can be hard to get into for those podcast fans that are used to listening to a new show in chronological order. To help these kinds of listeners, we’ve done the heavy lifting of finding the top six episodes of the podcast that offers a great starting out point for new Radiolab listeners. Episodes are divided by topic, o have a look and try to find one that captivates you.

The original episode about Crispr aired on June 6th, 2015. To save you all of the scientific jargon about what Crispr is, it essentially boils down to a method with which humans can rewrite DNA sequences. Kurlwich and Abumrad spend some time in the episode expanding on just what Crispr is and manage to explain what is a ludicrously complicated topic in an easy to understand way.

Following that, the two talk at length about the actual applications of the technology, which proves to be captivating listening. This ranges to everything from resurrection of the actual rewriting of human and animal DNA. The episode also dives into how Crispr is already being used, which gets expanded upon in an updated episode on the topic that was released in 2017. It has been three years since then, so hopefully, we get another update sometime soon.

We go all the way back to May 24th, 2007, for this one. The concept of sleep is one we are all familiar with to some degree, and most of us are curious about it somewhat, although most never seek out the answers to the questions they have, partly because those answers don’t yet exist.

This episode hopes to provide you with the answers that do exist and bring you deeper into the concept of sleep as a whole. Given such exciting subject material, it’s no wonder this episode is such a captivating listen. It features interviews with industry-leading experts on the topic, so you know you’re getting quality information.

Broadcasting on May 21st, 2012, Colors is a bit of an oddball when it comes to Radiolab episodes. Rather than being presented in Radiolab’s usual format, this episode features its topics delivered in a narrative stylization as opposed to a scientific one. It is a mixture of science and art.

Kurlwich and Abumrad consider the topic from multiple lenses. The questions they dive into range from the obvious to the abstract, and it makes for genuinely captivating listening. One notable example of how the episode is presented in a narrative format is when the two put forward the story of a sea creature that sees color differently from humans. Ultimately, the story boils down to the topic of how dogs see color, but the presentation makes it much more engaging.

From October 8th, 2010, this episode touches on everything, well, cities. The presenters dive into just how cities work on multiple different scales, from the large and extravagant, to the tiny and obscure details. The two have done some serious research into what makes cities tick for this episode, and it shows.

However, it’s not all stats and numbers. The episode features a discussion about the similarities between the world’s most prosperous cities, as well as entertaining anecdotes and stories about unusual cities that have popped up over the course of history.

One such story is about a small town that had a coal mine firing blazing beneath it for over 50 years. There are interviews with city dwellers, which is a nice change of pace from the usual scientific guests that appear on the show, and the whole episode is backed by a low city-scape soundtrack, which is a testament to the level of production and care that goes into the podcast.

Blame is an episode that is driven much more by emotion rather than intellect, which aired on September 12th, 2013. The episode features three stories, each of which is designed to help you to understand the moral and emotional aspect of blame, as well as presenting you with technologies that can help us to collectively understand the concept of blame.

One of the punchier aspects of the episode comes with the discussion of two felons. A guest reporter appears on the show to share a gut-wrenching story about the relationship between a murderer and the father of the murdered girl. The story discusses how both parties came to understand the crime and is an emotional climax on what is a very noteworthy episode.

Airing on July 27th, 2017, this episode is the newest one on this list and is particularly topical even in 2020. The episode largely deals with the concept of fake news, but in particular, focuses on the technology developed by Adobe known as Adobe Voco. The software is essentially a Photoshop for voice and allows people to create fake videos of people saying things that they actually haven’t.

Kurlwich and Abumrad get their hands on the program for the episode, and the two concluded that while the technology is certainly impressive, the moral, ethical, and security questions that it raises are seriously concerning.