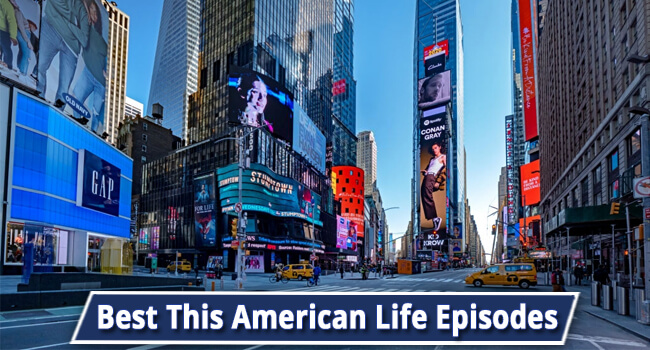 Since November 1995, the weekly radio show known as This American Life has been running. Over 690 episodes have aired, and a growing audience of millions of captivated listeners tune into the hour-long show. The show is hosted by Ira Glass and consists of journalistic non-fiction, memoirs, short fiction, and other fascinating pieces.

Some of the best This American Life episodes have been the most suspenseful and unpredictable. The list that follows includes some of the top ones to listen to if you are just getting started, according to popularity, many avid listeners, and even the show’s own host.

In Episode 360 title “Switched at Birth” and aired on July 25, 2008, Ira Glass and reporter and author, Jake Harpern, tell the strange but true story about how two infants were switched at birth in a Wisconsin hospital. The impact of the switch was very real and far-reaching, as you might imagine. The truth did eventually make its way out some 40 years after the 1951 blunder.

The episode is highly rated and one of Ira Glass’ top picks. It is divided into a prologue and two acts. In the prologue, the main characters in this unbelievable story are introduced by the show’s host. They are the two mothers and the two daughters who were switched.

In the first act, Jake Harpern retells the stories of the lives and experiences of the two girls and the impact this had on them. The second and last act is told by the host and shares the mothers’ experiences—one who discovered the mistake and the other who was utterly unprepared to learn of it.

Not all episodes are as emotional and intense as the previous. Many are relatable and presented in a light-hearted manner. Most adults can relate to the experience of heartbreak, and although it hurts a lot during the time, there are often some future chuckles in store concerning the whole ordeal. These are the reasons why Episode 339, entitled “Break-up,” is among the best.

An exciting selection of experts joins the host in presenting this much-loved and funny episode. There is a lady who is right in the middle of a break-up and going through the emotional rollercoaster and conclusion it carries. There is also writer Starlee Kine, who asks Dr. Phil some related questions, just to name a few of the episode’s guests.

No Coincidence, No Story

Who doesn’t love a good coincidence? Some situations can have your mind racing and leaving you gasping. We want to know what the odds of such a thing happening are and question if we are not mistaken. These are some of the reasons why Episode 589 is one of the best “This American Life” episodes. You have the unique opportunity to listen in as the show’s producers ask listeners for some of their most interesting coincidences.

Out of 1300 submissions, a number of them are chosen to be the subject matter for this episode. Included in these are the stories of grandmas who have multiple strange coincidences that happen to them and other bizarre coincidences related to romance. The hosts and guests of this episode go about dissecting some of the odd happenings sent in, and in many cases, rationale and reasoning fall short in explaining these away.

An earlier episode if the radio show from 2001, “Babysitting,” was the 175th to be aired. Parents go through a lot to find and vet potential babysitters, while the babysitters and children also have their share of adventures.

This episode is very relatable, with tales about babysitting and the crazy things that can happen. There’s even a story about two siblings who invented some kids to babysit just so that they could get out of the house. Some of the stories here are unbelievable, funny, or a little scary, but they are all true tales worth listening to.

A few episodes have landed the show awards. Episode 688 earned a 2020 Pulitzer Prize for audio reporting, a significant achievement, and a first for the show. The show featured frontline reports about the “Remain in Mexico” asylum policy by the Trump government. Asylum seekers, as well as officers who sent them to a makeshift refugee camp, share their perspectives with host, Ira Glass, reporting from the frontline.

The first act of the episode has Molly O’Toole speaking with U.S. asylum officers. She is a reporter with the Los Angeles Times. The second act follows Emily Green, another reporter, as she meets a Mexican man being deported and with fears of getting kidnapped. Her full report on Vice News is available here.

This award-winning episode is truly eye-opening. You hear from people on the ground, experiencing the whole meaning and impact of immigration policy. This is undoubtedly one of the best podcast episodes made possible by some excellent reporting.

The Fix Is In

Some stories and concepts from the show have gone on to be used in and for various films. That is the case with Episode 168, titled “The Fix Is In.” In this episode, author Kurt Eichenwald relates the story covered in his book, “The Informant.”

It is a thrilling story based on the price-fixing at food company ADM and the executive who works closely with the FBI to tell the story. This exciting episode inspired Scott Burns, the screenwriter, to adapt the book to a major motion picture.